Swiss dance championships have often had one or two surprises in store – but the 2020 event in Wallisellen exceeded all expectations. Jure Bergant / Luana Valentino, a couple unknown in Switzerland until a few weeks ago, immediately succeeded in winning a gold triplet – what a big surprise. The Slovene and the Ticino woman have only been dancing together for two and a half months, so they had nothing to lose at their SM premiere and were clearly dancing carefree. “We have invested a lot, especially in athletics,” says Luana, looking back on the last ten weeks. 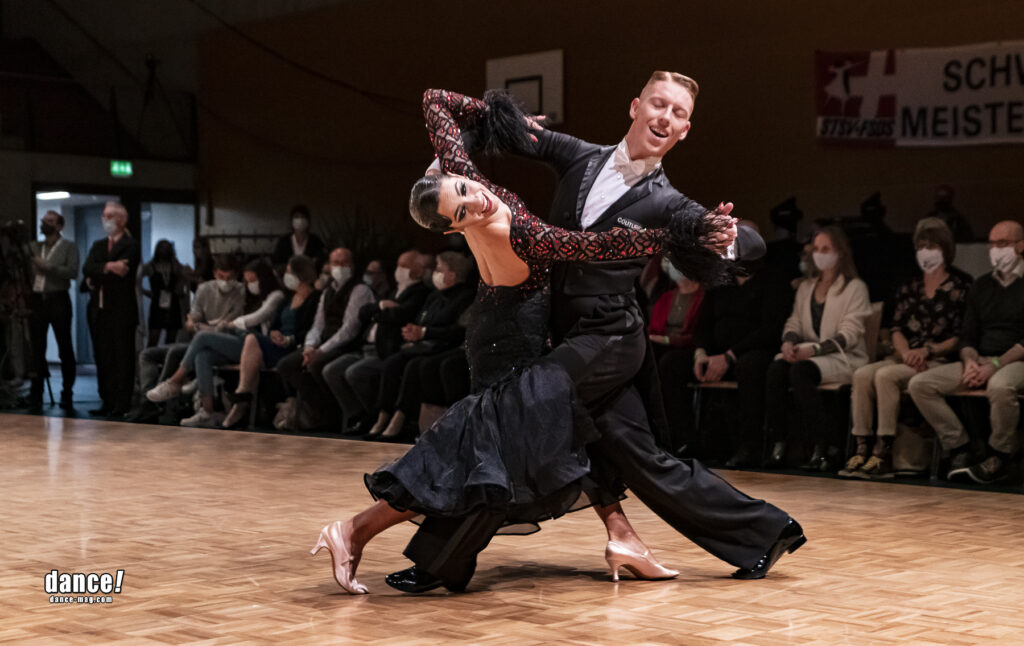 “We couldn’t expect that we would be rated so highly – but of course we are over the moon.”

The two newcomers, who are licensed for the Tanzsportclub Zug, fought an extremely close head-to-head race in the standard competition with the defending champions Corrodi / Kucharzcyk and Kasilov / Dreier. After four dances, the three couples were tied ex aequo, the decision was only made in the final quickstep. In the Latin competition, Bergant / Valentino took first place in all dances, even if 2 of the 11 Swiss judges consistently placed them in last place.

The gap between the two young couples Geiger / Pisarenko and Hofstetter / Hoffmeister, who surprisingly pushed Corrodi / Kucharczyk off the podium, was too great. Whoever wins standard and latin should also get the title in tenth dance. Bergant / Valentino followed this logic, also won eight out of ten dances on Sunday and pushed the defending champions Corrodi / Kucharczyk and Büchel / Landolfi to the places of honor.

Who are these new high-flyers? If you look at her career, you can understand the unexpected result a little better. Jure Bergant comes from the Slovenian metropolis Ljubliana, has been dancing very intensively for 15 years, has already won national titles with a previous partner and is 50th in the WDSF world rankings.

Luana, born almost 23 years ago in Biel, started ballet lessons at the age of 6, attended the Cosi-Stefanescu Academy in Reggio Emilia and then won an award for best Swiss ballet dancer in Lugano. Due to the bankruptcy of the globally active school Aplomb, Luana Valentino was accepted at the world-famous Academy of the Bolshoi Theater, which no dancer from Switzerland has achieved so far. “I had to make a lot of sacrifices,” Luana remembers that time in Russia, “but today I not only have a diploma as a ballet dancer and choreographer in my hands, but also a cantonal high school diploma from Lugano.”
Luana, who is now studying at the University of Milan, finally had a choice. Should she stay at the theater or embark on a completely new dance career? “I wanted to follow in my father’s footsteps and got into dance sport,” she says, explaining the move from the stage to the dance floor. “And I made a conscious decision to dance for my country and now – after these successes – I would like to represent Switzerland internationally.”