What a heartbeat final at the Swiss Standard Championship in Wallisellen! Volodymyr Kasilov/Yulia Dreier (DUZ) only beat Davide Corrodi/Maya Kucharczyk (TSCZ) in the final Quickstep to secure their second title after 2017. Bronze went to David Büchel/Flavia Landolfi (TDSC).

Somehow it looked like it would be a close race in the main category. Most recently, the ten-dancers Corrodi/Kucharczyk had their noses in front at the European Standard Championships and at the WDSF tournament in Brno. But Kasilov/Dreier, Swiss champions for the first and last time in 2017, were always a force to be reckoned with. Last year, these two couples and the eventual winners Bergant/Valentino were already in the lead ex-aequo after four dances. And this time, too, the two favoured couples were again tied before the final Quickstep. Kasilov/Dreier won the English and Viennese Waltz, Corrodi/Kucharczyk won the Tango and Slowfox. There were hardly any differences in the Quickstep, the seven judges decided in favour of Kasilov/Dreier in a ratio of 4:3 – it really doesn’t get any closer than that.

“We were only focussed on ourselves and then only know whether we have delivered a top performance ourselves,” Yulia Dreier explained afterwards, “so we don’t get to see how the competition is doing. This time they were simply more relaxed and completely ignored the fact that the title was at stake. They danced only for themselves and simply gave their best. The negative thoughts of the last three years, when they kept missing gold, were blown away this time. “The audience pushed us and carried us from the first moment,” Kasilov explained the regained looseness, which was rewarded with the second title after 2017. For Dreier it was already the sixth championship title; she won four times earlier with her Bernese partner Mark Stalder.

The duel for bronze was secured by David Büchel/Flavia Landolfi relatively clearly ahead of Federico Antonini/Benedetta Castaldi. They finished third four times, only just in the Quickstep did they have to let the DUZ pair push them down to fourth place.

“Meagre” fields of participants in the youth competition

That STSV has a youth problem became obvious once again in the finals of the three youth categories.

In the youth category, Roman Tikhonenkov/Eva Pikulina (DCNH) secured the gold medal ahead of Luano Brändle/Aleksandra Schürpf (TDC). These two couples were outdanced in the final danced together by the younger junior couple Arjan Steurer/Aroa Martin. Two junior couples unfortunately withdrew at short notice, so that the TDC couple became champions without any competition.

In the pupils’ competition, where a few years ago more than ten couples had danced for the three sets of medals, there was unfortunately only one duel between two DUZ couples; Mihail Novikov/Elvira Sofia Frunz decided this in their favour ahead of Leonard Parashchenko/Sofia Novikova.

The highlight of the Glattal Cup, which was held at the same time, was the main Latin category, which also thrilled the professional audience present during the evening programme. The four couples of the organising Turniertanzsportklub Zürich (TTZ) dominated the scene. 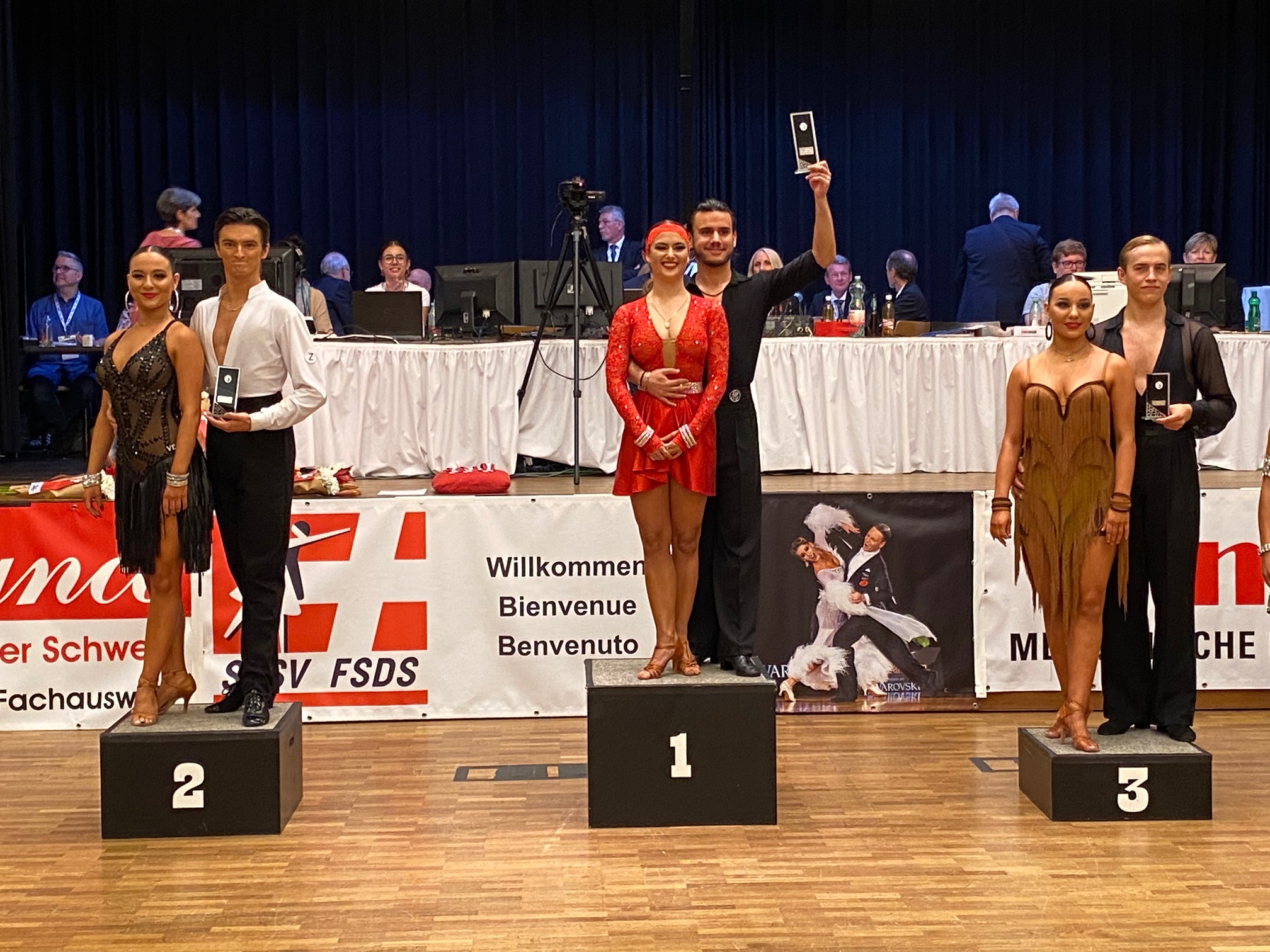 Last year’s SM runners-up Tristan Geiger/Catherin Pisarenko lived up to their role as favourites and secured victory. They won four dances and were only beaten in the Rumba by the surprisingly strong Dominik Zimmermann/Mae Hoffmeister. In the duel of the twin sisters, they relegated Philipp Hofstetter/April Hoffmeister to third place. The new pairing Dominic Granwehr/Angelina Lesniak also showed potential in fourth place.