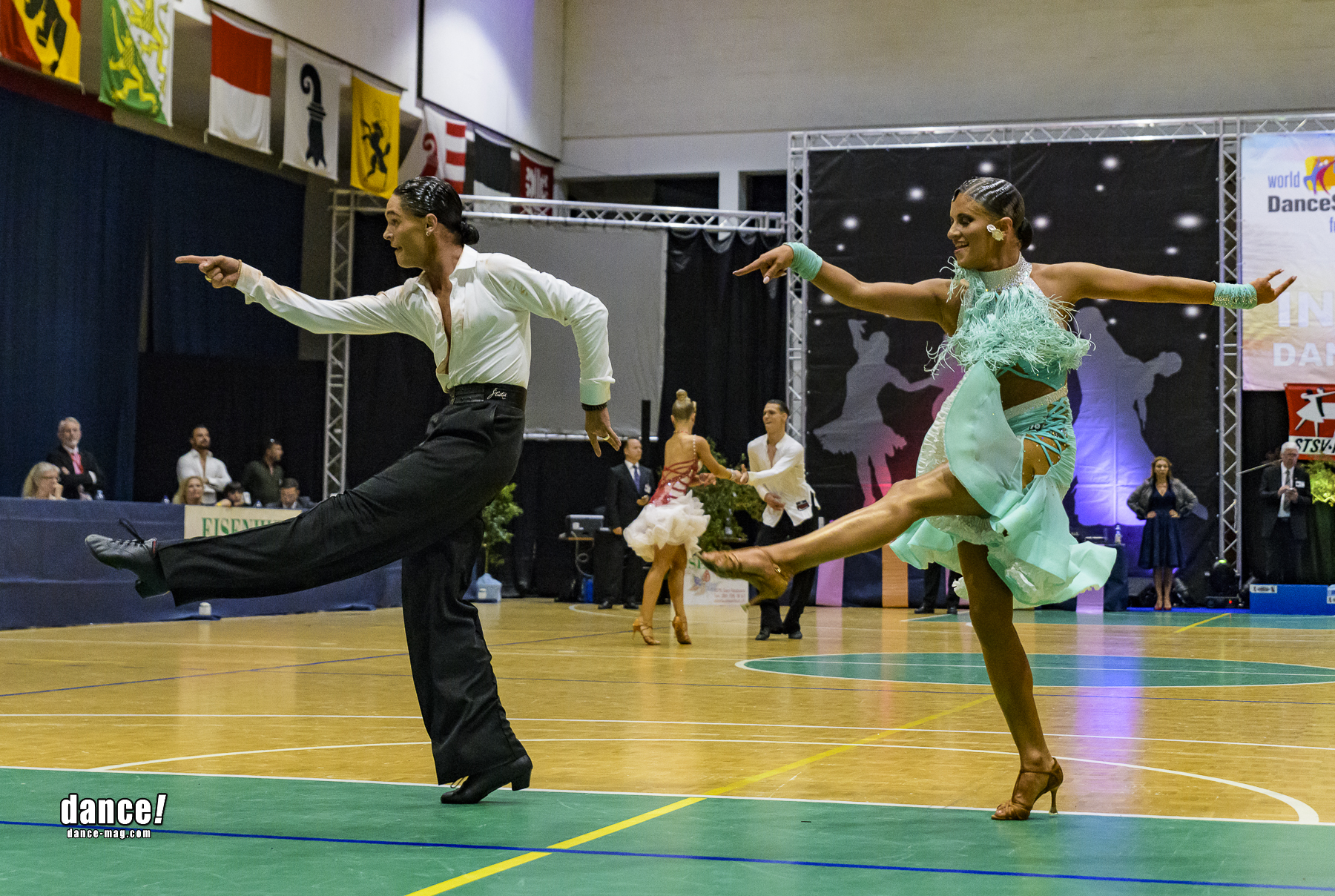 The Ticino Danza Sport Club TDSC invited to the Tessin for the Swiss Championships. The sports hall Palapenz presented good conditions for a dancesport event lasting several days. There were WDSF competitions in various categories before and after the Swiss Championships. Unfortunately only a very small audience found its way to the Palapenz. The dancers performed more or less only under the eyes of insiders. Including K- and DC-classes, the program was very comprehensive even though only 75 couples were registered. 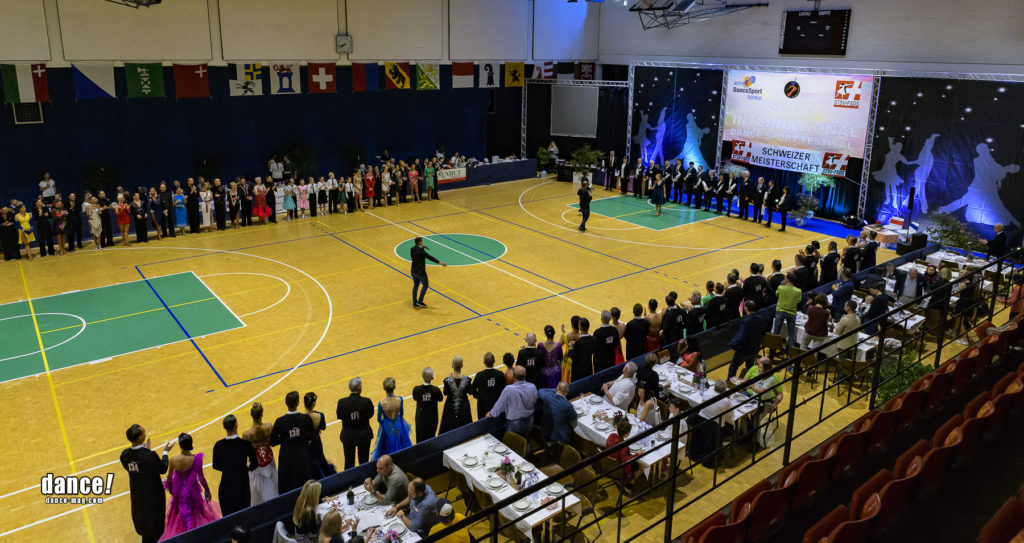 In both adult categories Standard and Latin, thrilling fights for the title could be expected. Many questions could be already asked ahead of time.

Would Pitt & Tiara Wibawa reach for gold after two silver medals? Would Alessia Gigli and her new Czech partner already be prepared to grab a title? Would one couple succeed this year in dominating the final? Or would there be a comparable level that might result in a surprising ranking order?

No, not this year!

Matyáš & Alessia dominated from the beginning to the end and left no question open about who would be fighting up front for the title.

Luca Bussoletti analysed the couples in detail in the absence of Tjasa Vulic: 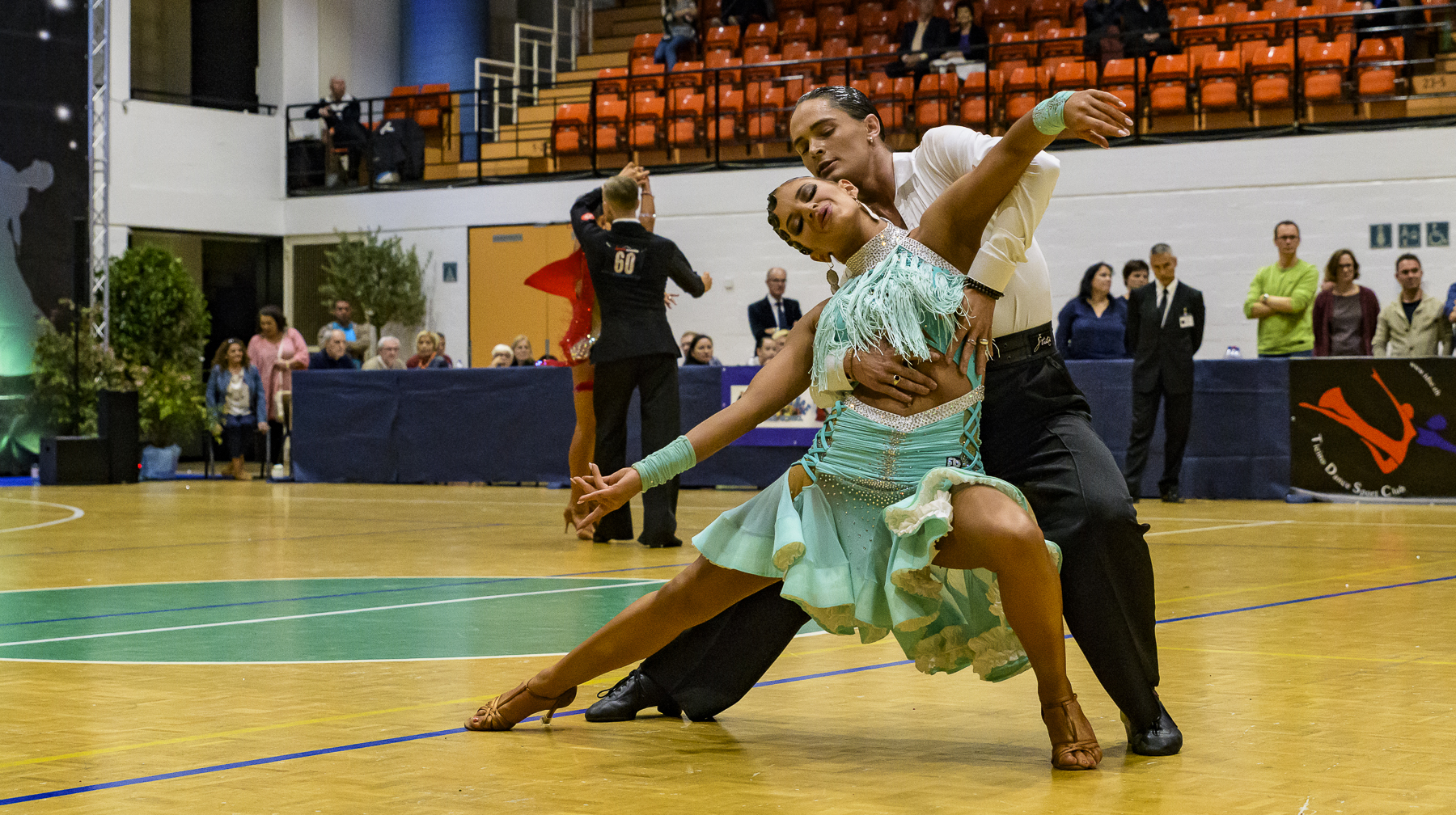 1° PLACE
MATYAS ADAMEC & ALESSIA-ALLEGRA GIGLI: a new partnership with a great future. A good choice of look for their style of dance and a great level of performance throughout the competition. Feet lose contact with the floor frequently where this technical detail should be present but overall a well-deserved win and title of Swiss national champions.

2° PLACE
PITT ALEXANDER WIBAWA & TIARA- SOPHIA WIBAWA: a couple which attracts audience’s attention immediately. A frequent mistake by Tiara of dancing with bent knees spoils her otherwise well-coordinated performance but their energy and well-executed, interesting choreography was what I appreciated greatly. 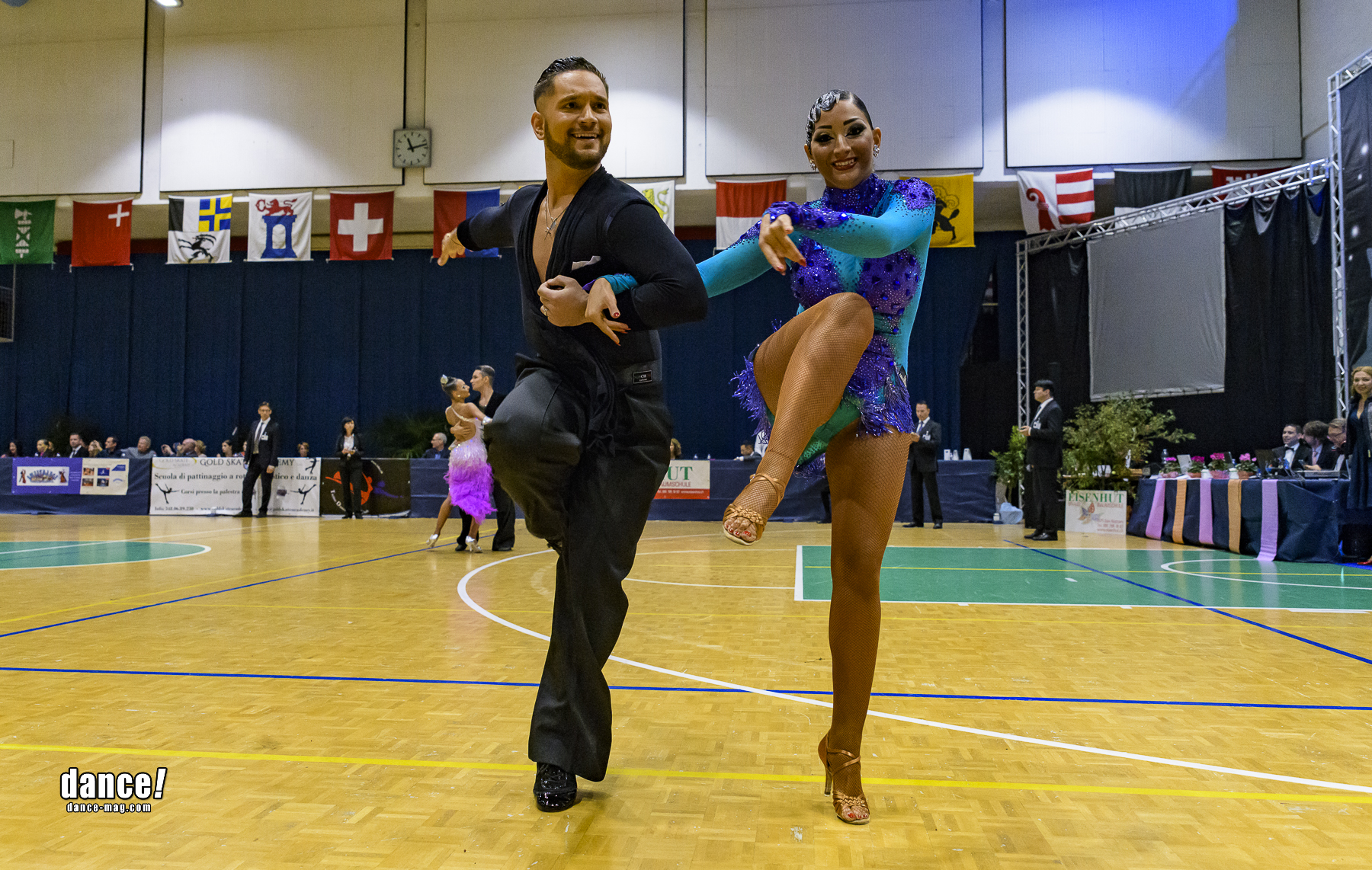 3° PLACE
VIKTOR VALENTIN LES & ANGELA LANDOLFI: last year’s champions presented a performance which was mature but looked at moments unrehearsed. Loss of balance and connection happened to often to enable them to reconfirm last year’s result. 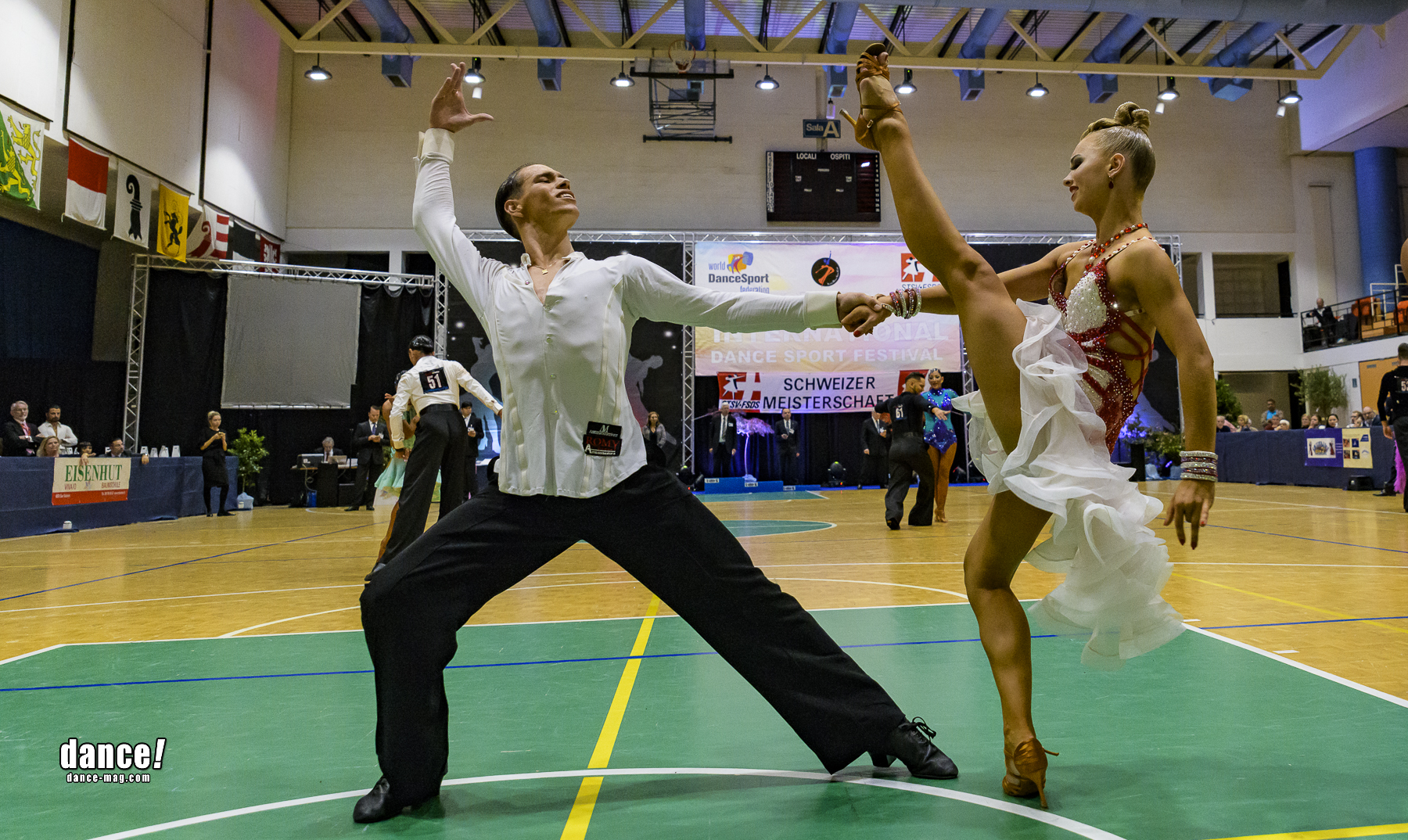 4° PLACE
DAVIDE CORRODI & MAJA KUCHARCZY: just like in the standard section, this couple’s performance was characterised by their great energy. Good use of contrast of speed made them interesting to watch and future work on foot actions and balance will enhance their natural abilities, making them the couple to watch for the future. 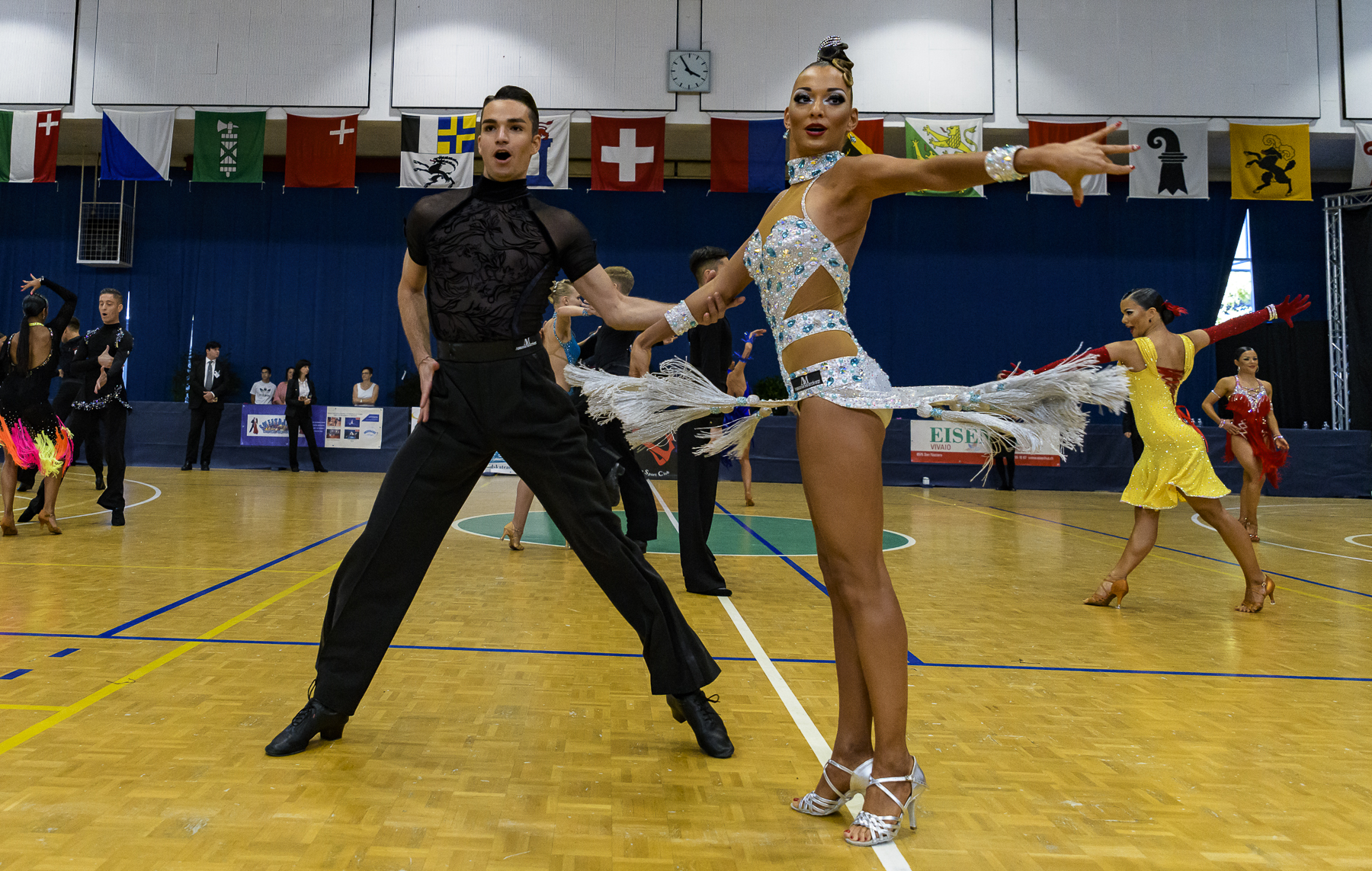 5° PLACE
DAVID BUCHEL & FLAVIA LANDOLFI: again a very elegant look from this couple. Just like in standard dances, they dance well but tend to be invisible due to a lack of energy in their performance. While I can appreciate them always looking balanced I would like to see them increase the amount of body actions, usage of body weight and overall energy level. 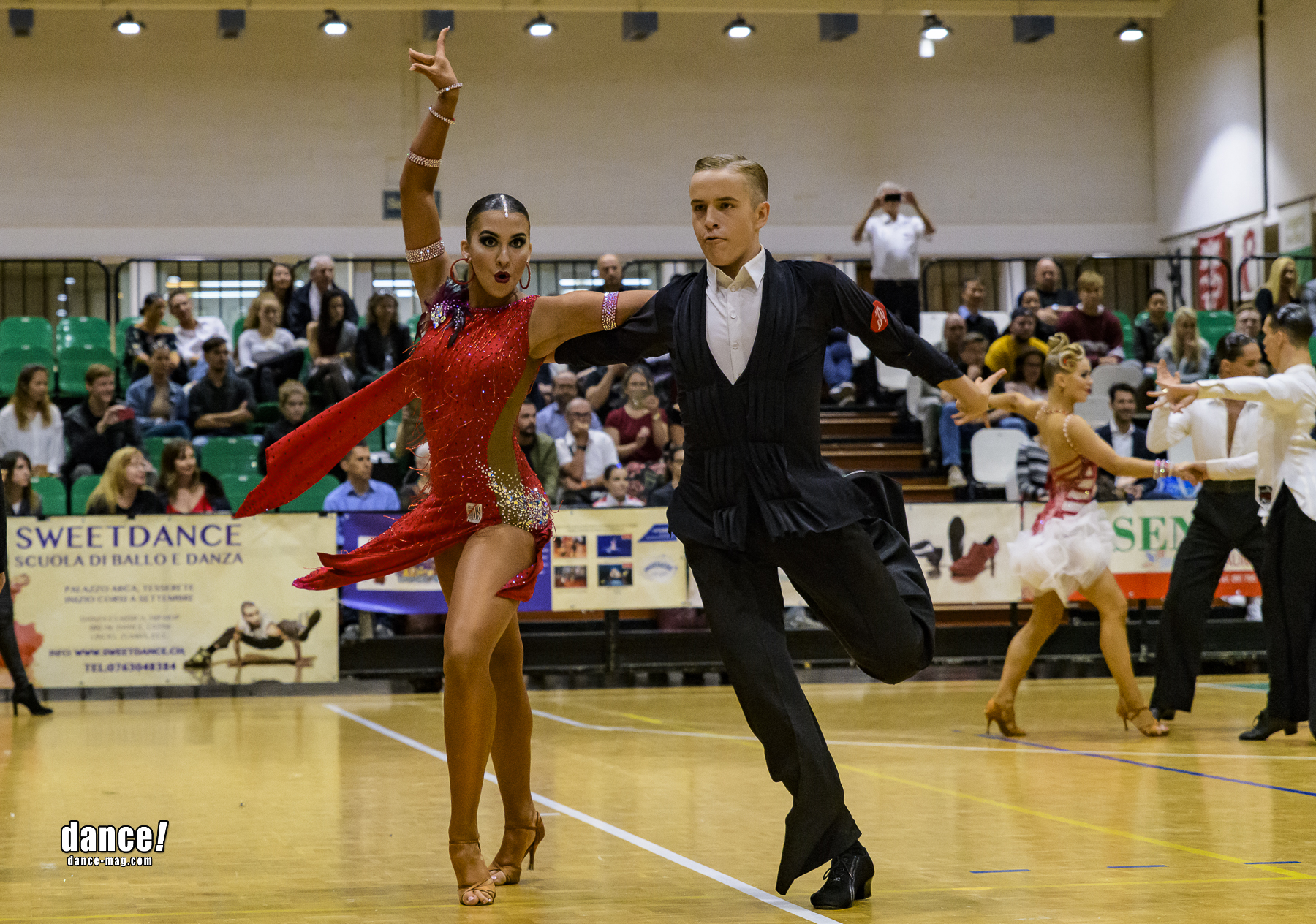 6° PLACE
PHILIPP HOFSTETTER & ANISSIA ENES: a visible loss of energy in the final round prevented them from reachinga better end result. Good expression and a natural ability to communicate with the audience will surely be a great asset for the future.

In standard, the duel promised to become thrilling as well as the current Swiss Champions Volodymyr Kasilov & Yulia Dreier and Davide Corrodi & Maja Kucharczyk were only separated by a few marks in recent WDSF competitions, either in favour of one or the other couple. Yet, how would it turn out after a direct comparison in a final? At the latest test at the Swiss Open in Frauenfeld Vova & Yulia could finish ahead of Davide & Maja. However, different judges, different form of the day and everything could end up different… To defend a title or to conquer a title results in different mental impact: pressure or eager challenge? Unfortunately, there were only two rounds to dance for the standard couples because of small numbers of attendance. Thus little time to get acquainted. Both couples could present a great performance in the semi. Davide & Maja achieved to further increase their output in the final. Vova & Yulia seemed to be a little tenser and less free. Luca analysed the details for us: 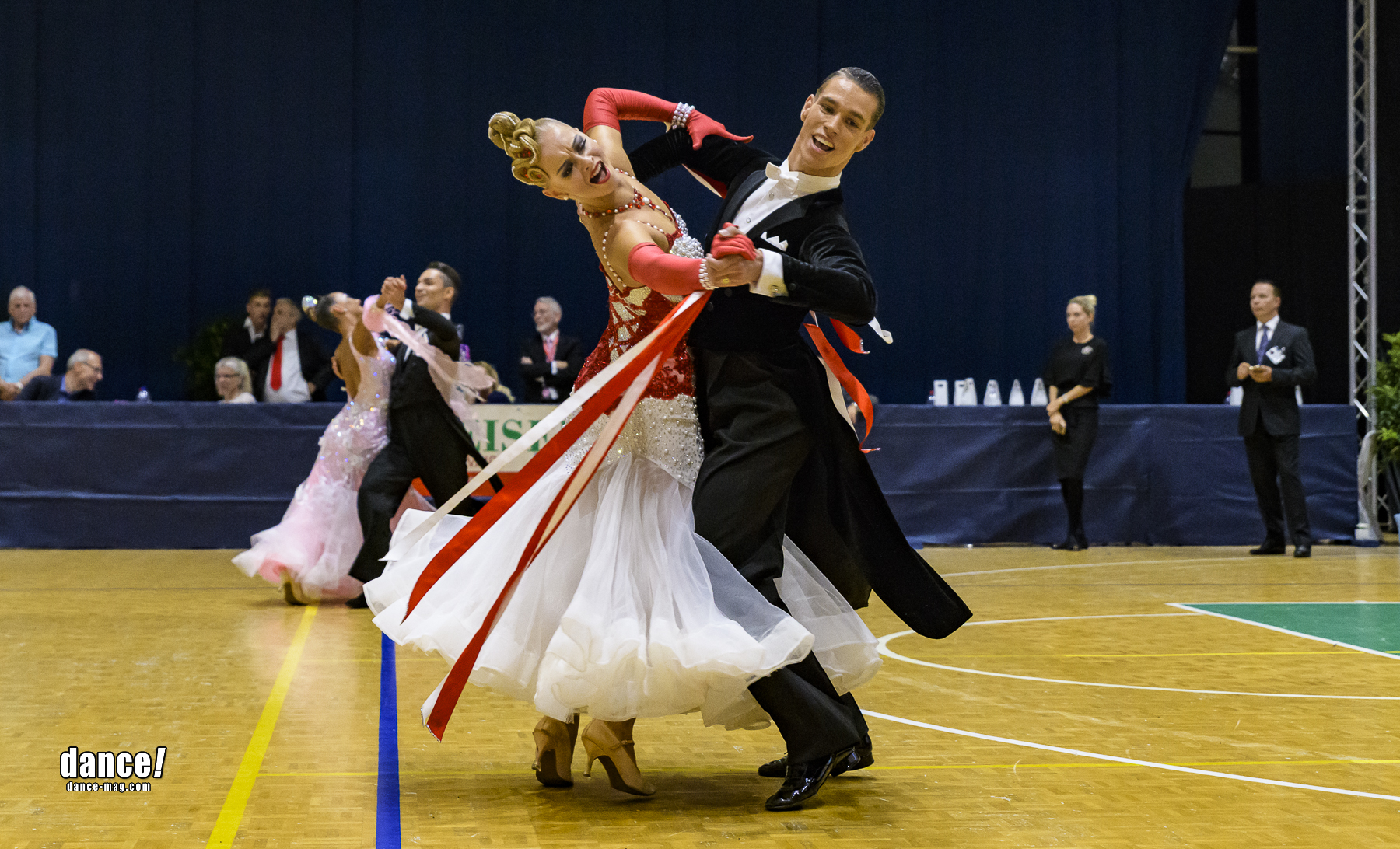 1° PLACE
DAVIDE CORRODI & MAJA KUCHARCZYK: This young couple danced their first championship in Adult category with determination and a great amount of energy, giving their performance the extra edge which convinced adjudic 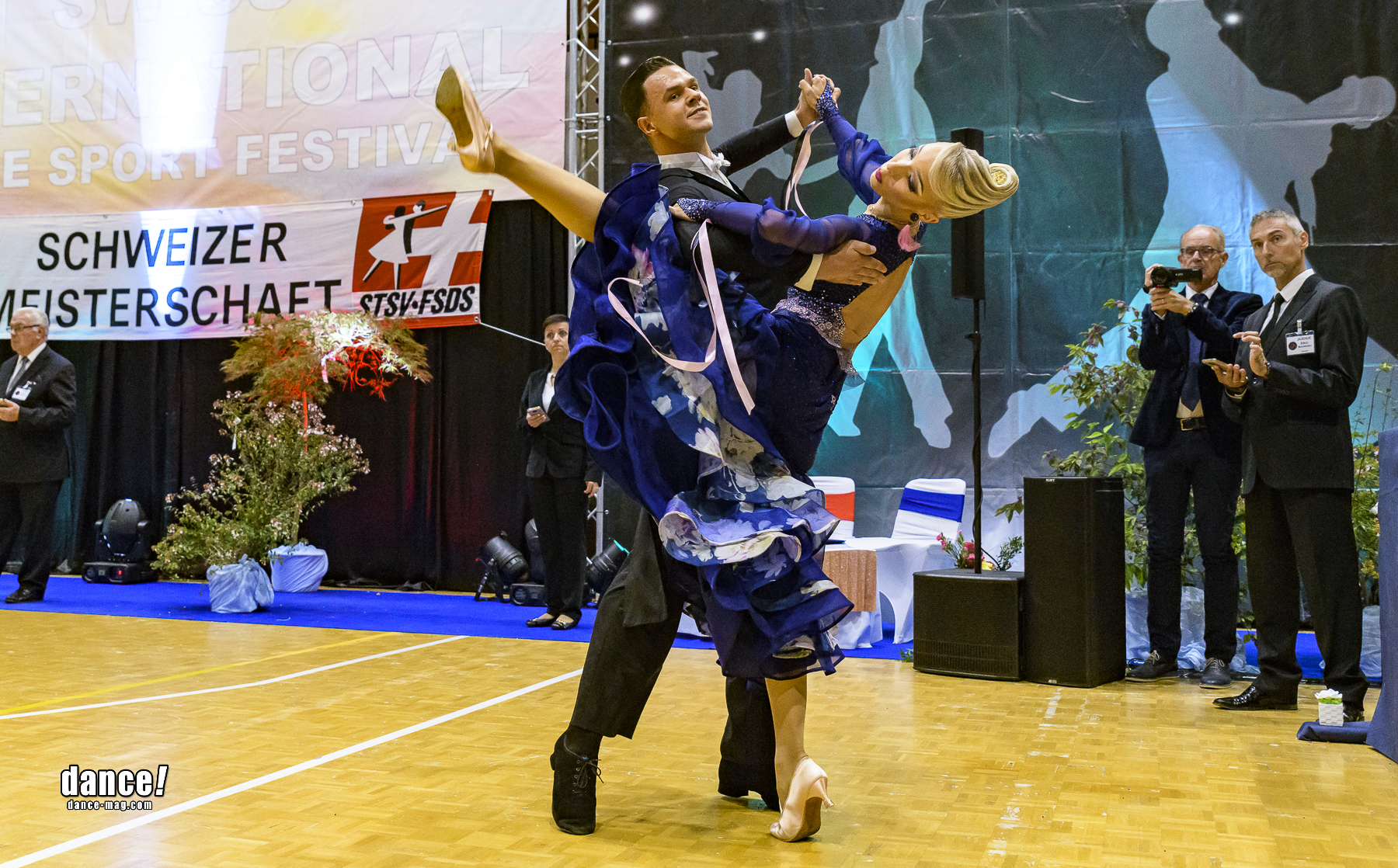 2° PLACE
VOLODYMYR KASILOV&  YULIA DREIER:
without doubt a very experienced and well-balanced couple which attracts attention easily. There were some distortions in Volodymyr’s frame due to incorrect position of elbows which spoiled the otherwise elegant and well-practiced performance. A very delicate and light look from Yulia complemented their style of dancing perfectly. 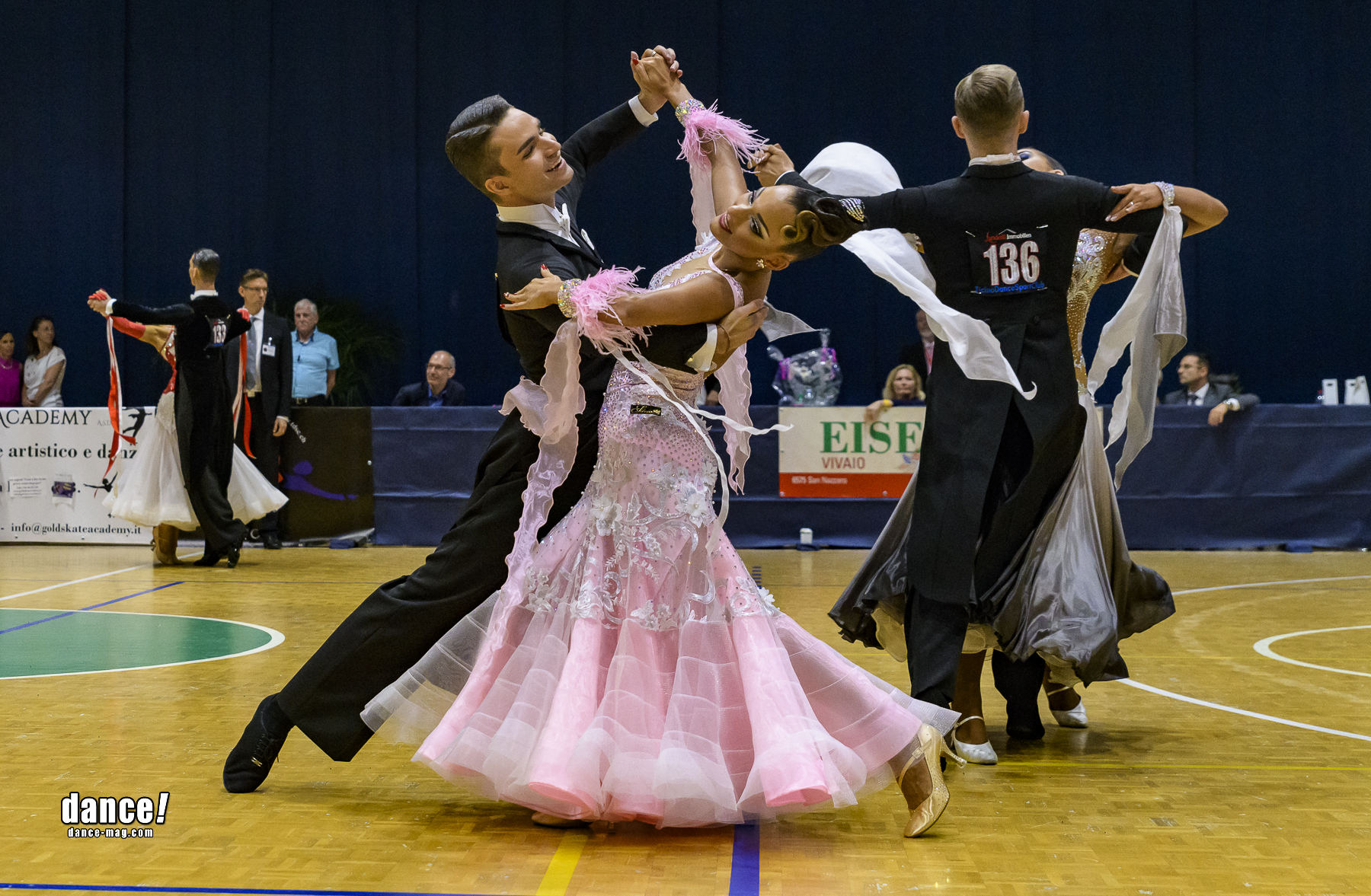 DAVID BUCHEL & FLAVIA LANDOLFI: as always one of the most elegant couples on the floor, their performance was very consistent but lacked in shaping and energy. A greater awareness of correct posture from David and recovering back to vertical position after shapes and extensions would help as would greater body translation from Flavia in order to keep the frame more stable and wider. 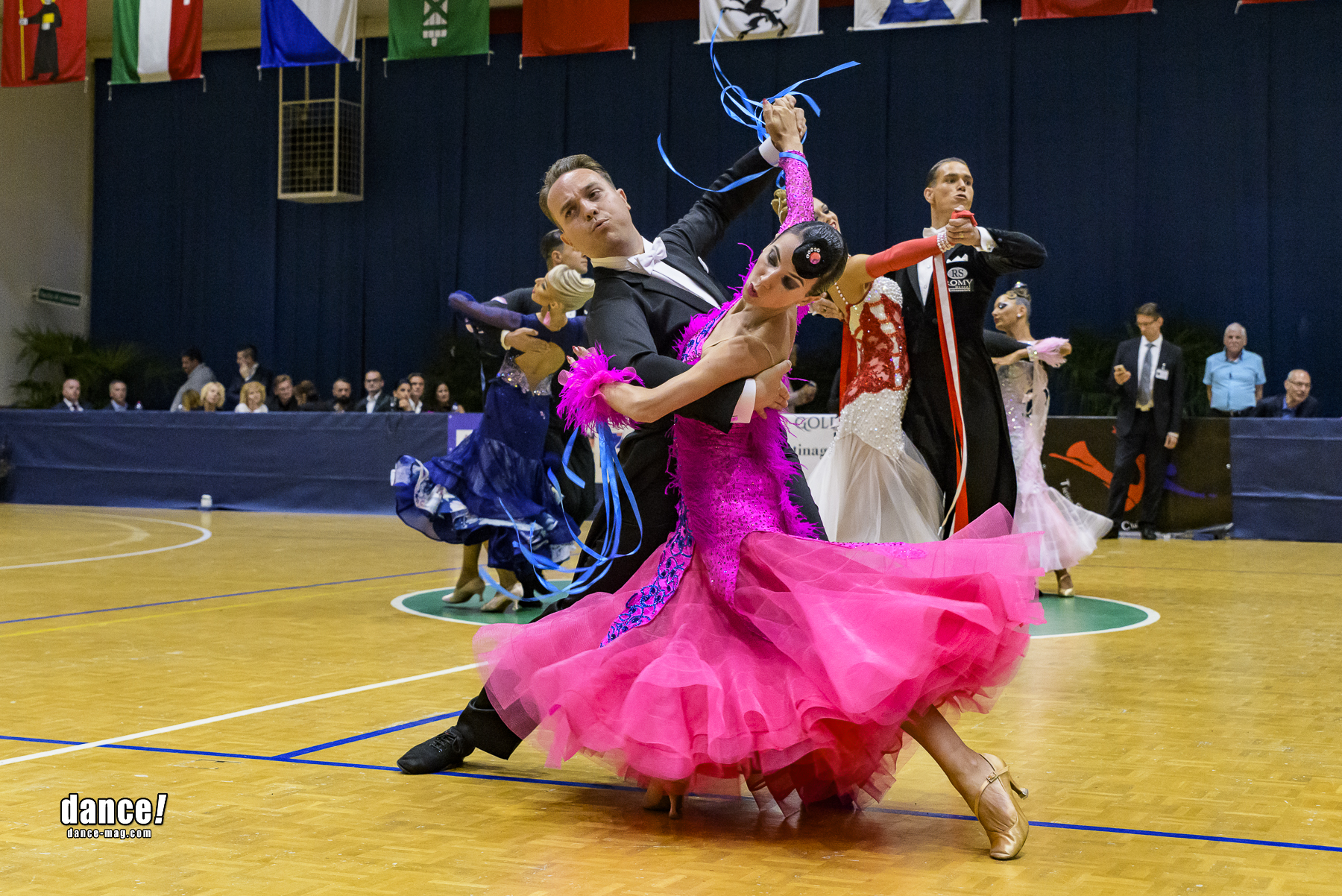 ROBERTO GARZO & GIULIA ZANLORENZI: Roberto and Giulia presented confident and energetic dancing with natural and pleasant expression but they do need to pay attention to their connection and frame. Roberto often over-extends his knees which, due to their height difference, doesn’t give Giulia the possibility to keep a stable connection. Frequent moments of crossing each other’s lines make the frame look smaller than it could be. 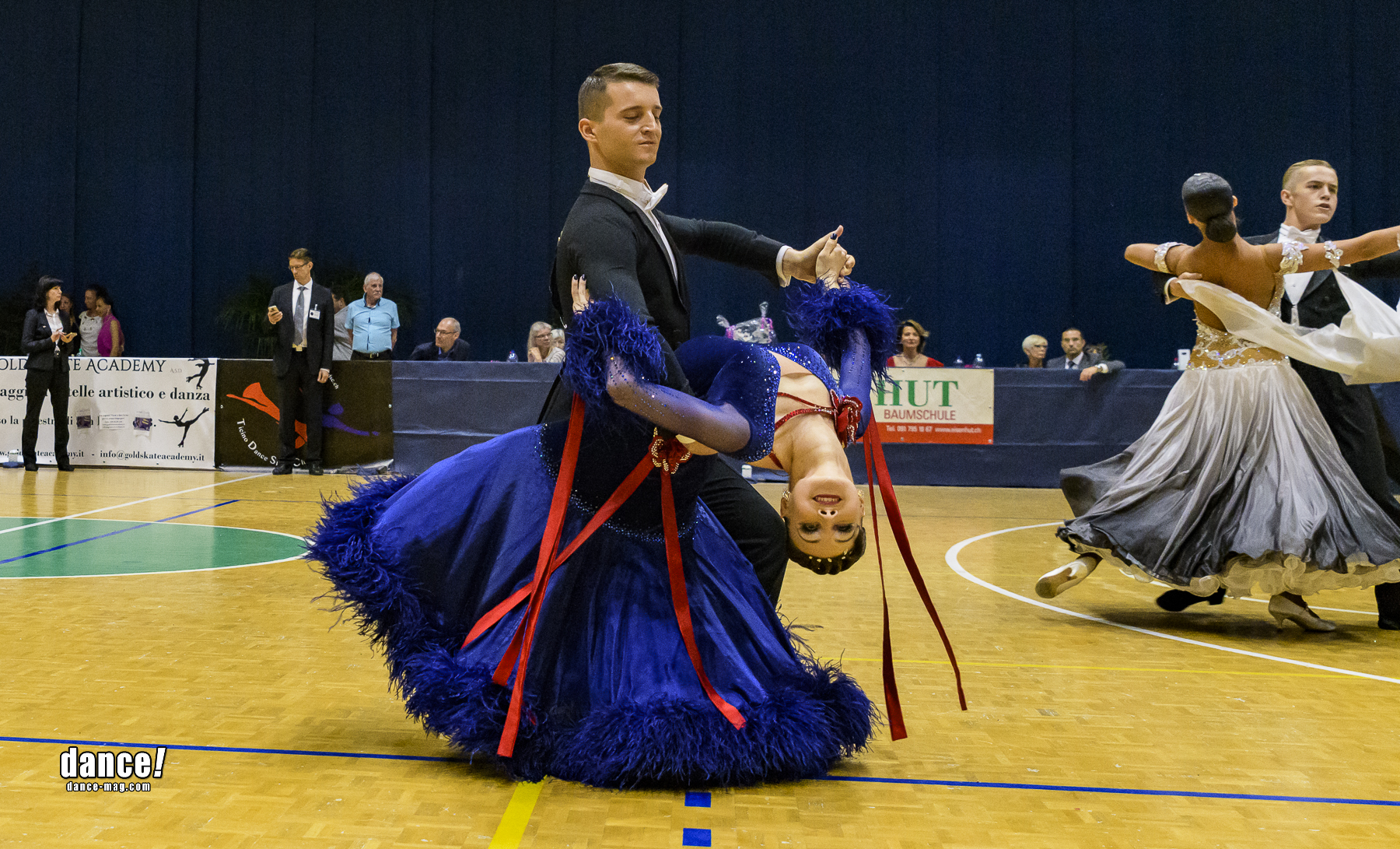 MIKHAIL RYBALKIN & MARIIA TIMOFEEVA: good energy but lacking in coordination and togetherness. More attention on the correct use of body, leg and foot actions would help them improve the overall quality of their performance. 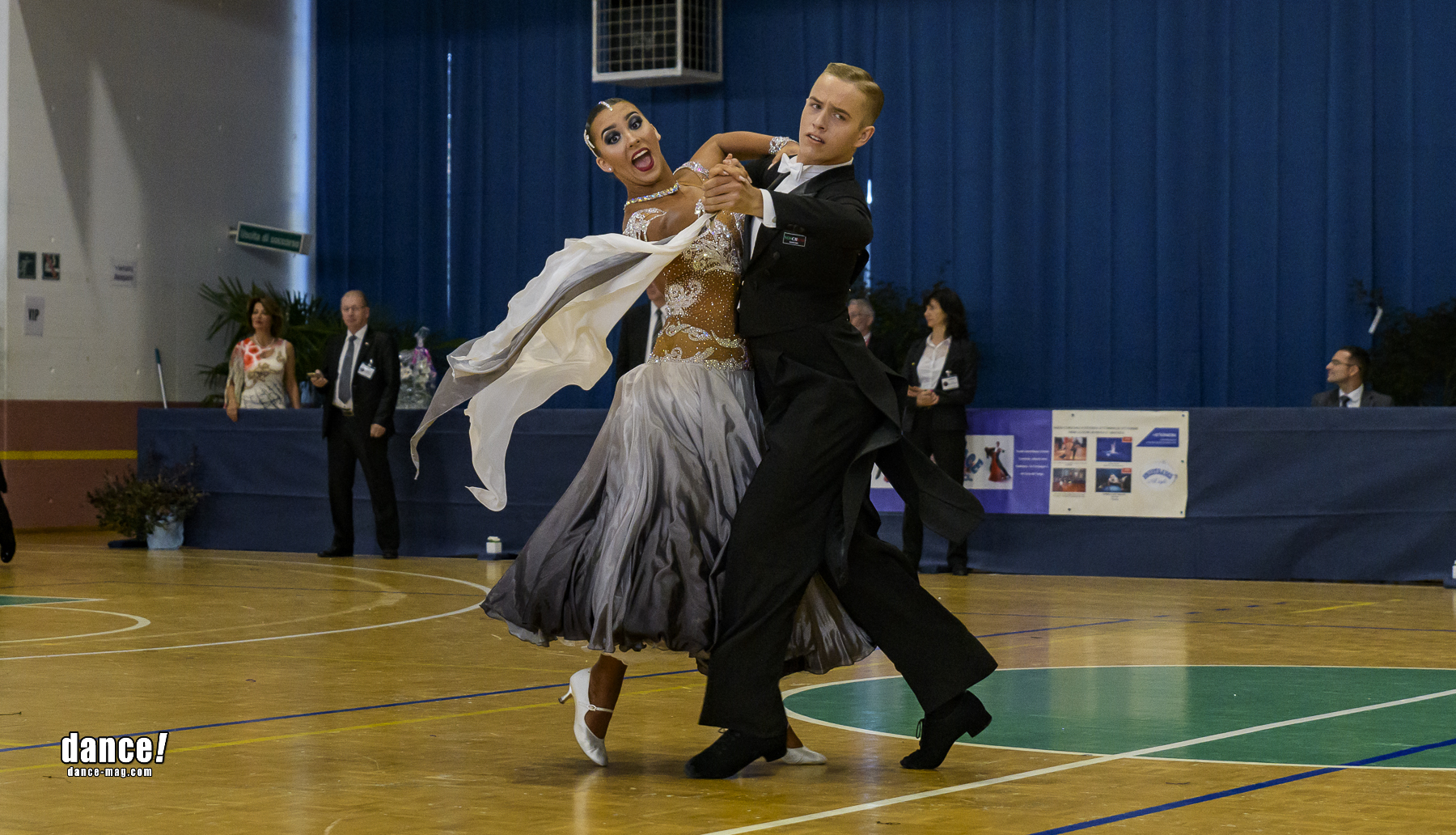 PHILIPP HOFSTETTER & ANISSIA ENES : this young couple, still dancing in youth category, captured my attention. Improvement of basic technique of leg and foot actions, combined with their great energy and expression would help them improve their result greatly. Choreographic choices are not always a perfect choice for them and should be looked at.

Already in the preparation of the Swiss Championships, I was able to talk to some of the top couples. Interestingly, the significance of the title means a lot to the dancers personally, however, the international results are valued higher considering their future careers. Those that really want to advance, shouldn’t relax too much in the sunshine of the results from the Swiss Championships, but keep up the hard work and educate themselves continuously and try to match with the best couples. “This will really take you ahead” was the clear statement.

This focus is impressive and recommended at least for the finalists of all categories.