The World Dance Sport Federation WDSF will continue to be led by powerful men for the next four years. The current president Shawn Tay from Singapore, who had replaced the Swiss Lukas Hinder in 2018, prevailed over his Danish challenger Ashli Williamson with 92:50 votes at the WDSF Annual Meeting. Tony Tilenni (Australia/Finance) was elected first vice-president, Nenad Jeftic (Serbia/Sport), Antoni Czyzyik (Poland/Development), Vasile Gliga (Romania/Marketing) and Marc-Frédéric Schäfer (Switzerland/Law), who was not supported by STSV, were elected for another term of office. The only woman in this circle so far – Leena Liusvaara (Finland/Communication) – had to make way for the Dutchman Jeffrey van Meerkerk despite very good references. Boris Odikadze (Israel), Charles Ferreira (France) and Patricia Goh (Canada) were elected to the WDSF Presidium as further members without special duties.

“Many qualified and motivated people who ran for an important task in the world federation did not stand a chance,” noted STSV Vice President Brigitte Stäldi. She regrets that there is now only one woman on the ten-member WDSF Presidium. “In a federation where men and women compete with each other as a pair, this is almost absurd – at least in our culture.”

In this digitally conducted meeting, which lasted about seven hours, there was generally a tense atmosphere because the delegates’ questions were often answered only unsatisfactorily or evasively. Nevertheless, the Presidium was discharged for its work over the past two years by 110 votes to 26 and was subsequently re-elected. President Tay and Chief Financial Officer Tilenni did not tire of mentioning that the WDSF had opened the IOC door with the inclusion of breakdancing at the 2024 Summer Olympics in Paris. They promised to do their utmost to ensure that Latin and Standard dance will also be included in the Olympic programme from 2028 in Los Angeles. 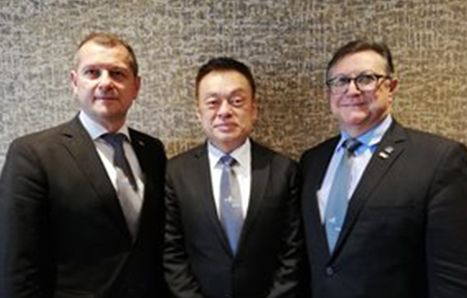 The WDSF trio at the top (from left to right): Nenad Jeftic, Shawn Tay and Tony Tilenni. (Photo WDSF)